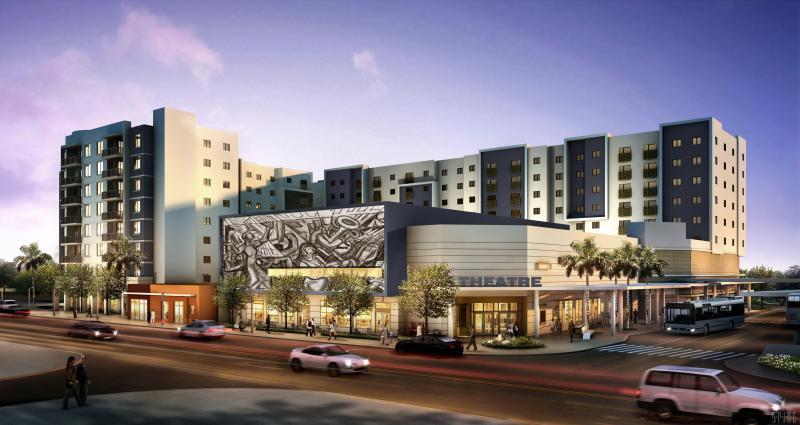 Project Summary: GOB funds were re-programmed for the development of a theater/cultural center as part of a mixed-use development on the NW 7th Avenue Transit Village project.

The Transit Village project was envisioned to create seamless access for commuters to and from the Liberty City area and connectivity between Miami-Dade and Broward Counties while serving several municipalities. The development includes affordable housing, retail/commercial space, and a multi-level parking garage component. A multi-purpose theater with an arts center component was subsequently incorporated into the village plan.

A ribbon cutting ceremony was held on April 29, 2016 to inaugurate the facility as the Audrey M. Edmonson Transit Village. On July 22, 2016, the BCC approved an Operating and Management Agreement with a local non-profit organization, Fantasy Theatre Factory, for the management of the theater and joint programming with resident company The M Ensemble. Following the theater’s grand opening ceremony and naming as the Sandrell Rivers Theater on November 19, 2016, The M Ensemble presented their first production at the theater, Kings of Harlem, on January 5, 2017.

The Theater is quickly establishing itself as an excellent resource in the community for not only arts and culture but also for civic engagement too.  The M Ensemble, has mounted three successful, critically acclaimed productions thus far; Fantasy Theatre Factory has held multiple field trip performances of its productions for children from area schools.